Another year participating at the Pasadena Chalk festival, and this time with a new team member. This year we continued our exploration with chalk, and as usual choosing a drawing for a mural became a last-minute task. The day started a little rough as it rained on Saturday morning, but that did not stop anyone for long. As soon as it got just dry enough, everyone eagerly began their drawing. Our choice this year was a cover of a comic book. It had an interesting theme, some fun characters and lots of colors. I think we executed it well, but wish we could have focused just a bit more on the details. 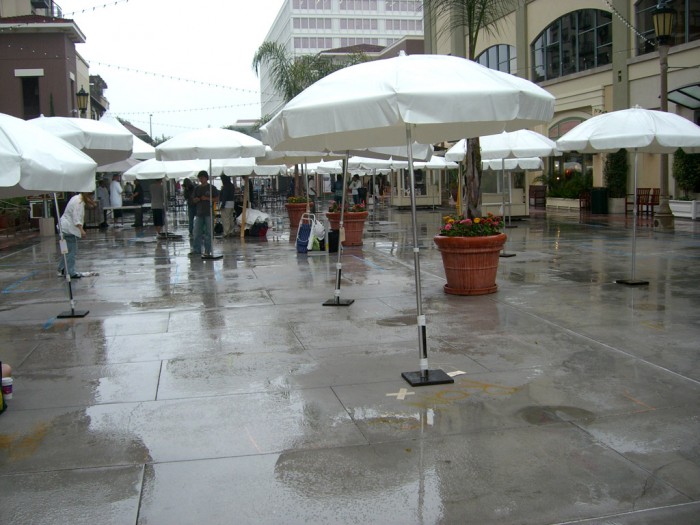 Day one, 7am began with some heavy rains. We picked up our squeegees, and waited for the cement to dry. Around 10 am it became safe enough to get started. 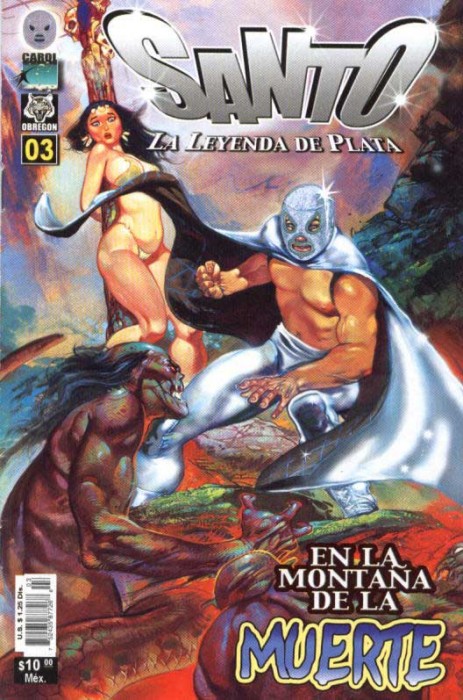 This was the original idea for the mural. I found this drawing online. This is the cover of a comic book for “El Santo”. El Santo is the name of a Mexican wrestler who became very famous in Mexico and around Latin America during the 60’s. So famous he starred in movies and comic books. He was a real life super hero for many fans, because while other countries had fictitious characters as super heroes, this persona actually existed and battled villains regularly, both on screen and in the ring. 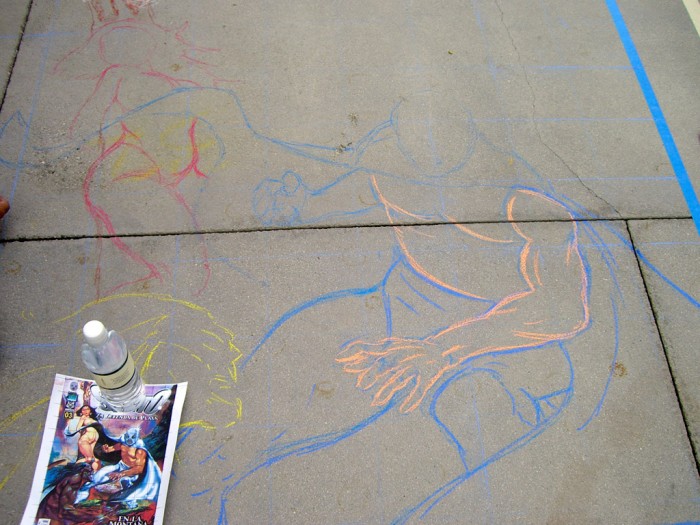 While the cement began to dry, we first created a grid and began outlining the main characters. 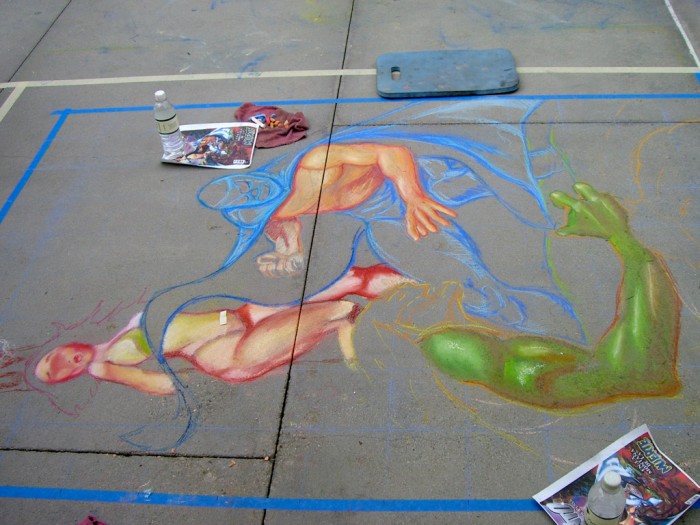 After outlining the characters we began filling in and shading the color areas. We left all the dark colors for later (Sunday) 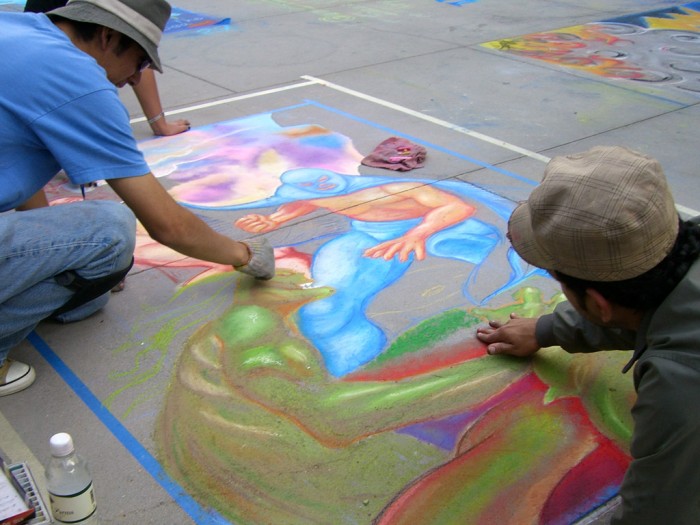 The rest of the day was mostly cloudy. We continued adding colors and filling in the areas. By this time we got some help from a new team member, Nash. She did a great job with the sky. 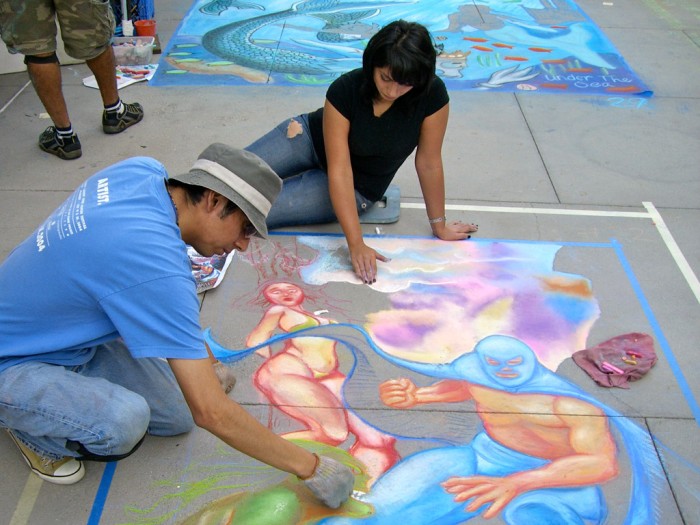 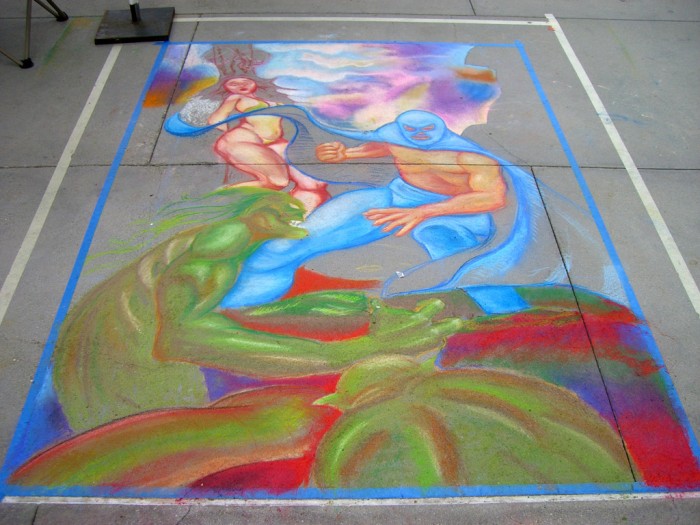 This is what the drawing looked like after day one. This picture was taken on Sunday morning. Notice there are no dark colors. We leave the dark color for the end because they tend to smudge really quick and its harder to correct them. 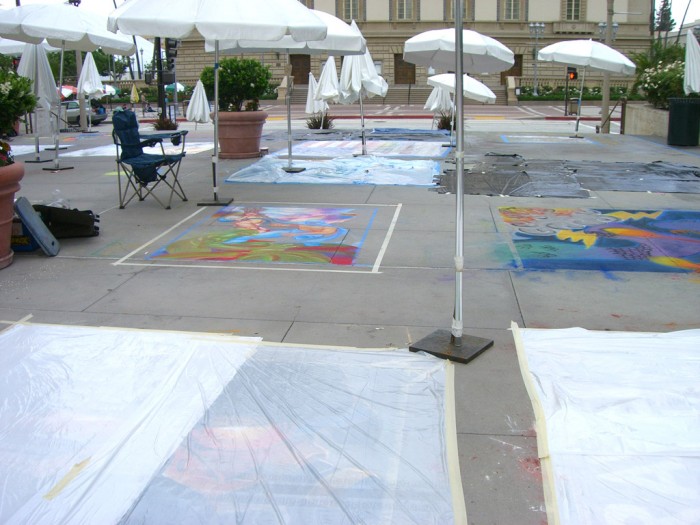 While most people cover their murals with plastic on Saturday night, we usually just leave it uncovered. Yes, sometimes careless people step on it. Oh well. 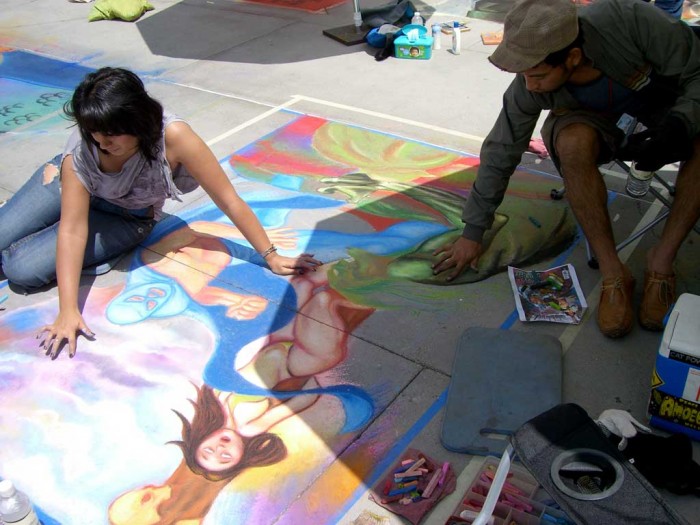 Here is Ender and Nash making lots of progress on the mural.  Ender is applying the dark colors while Nash is working on the sky and mountains. 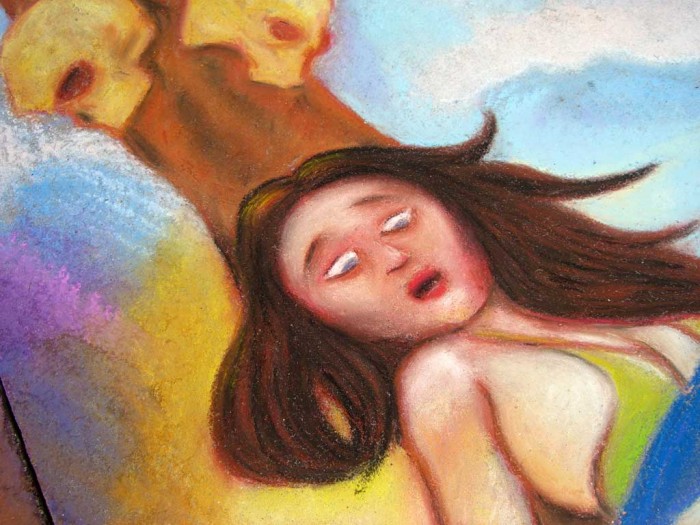 Here is a close up of the girl’s face. Both Ender and I worked on the face and body of the girl. She was fun to draw, and people passing by often commented on how curvy this character was. 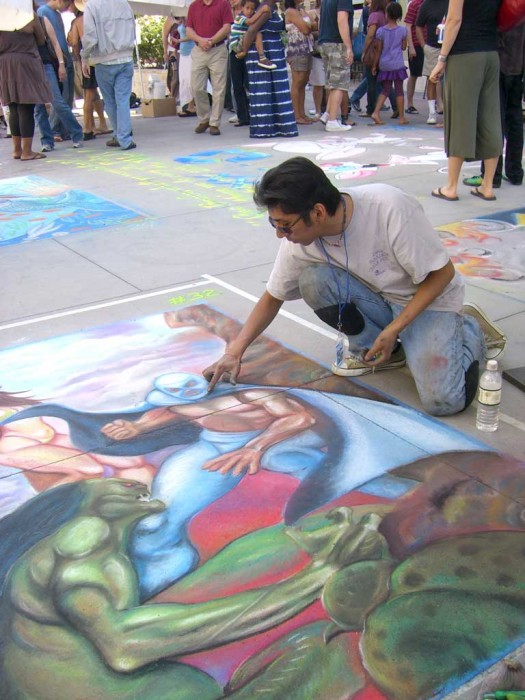 Here I am making progress on the mural. By this time most of the area is covered and only the details were left. 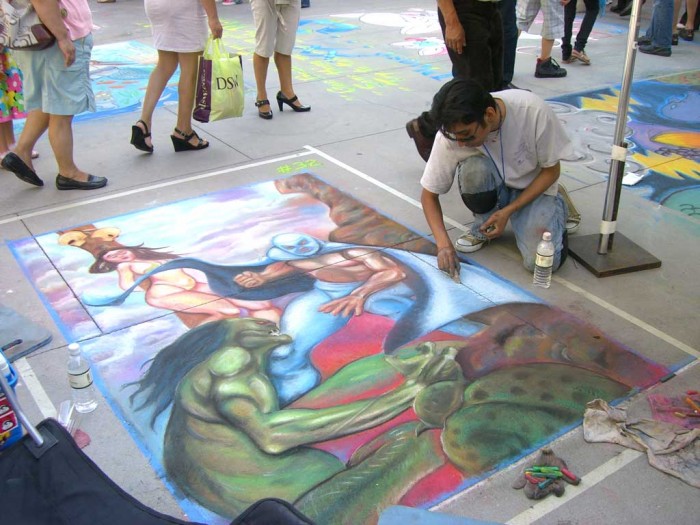 We attempt to complete the mural by  Sunday early afternoon so we can enjoy the rest of the day. 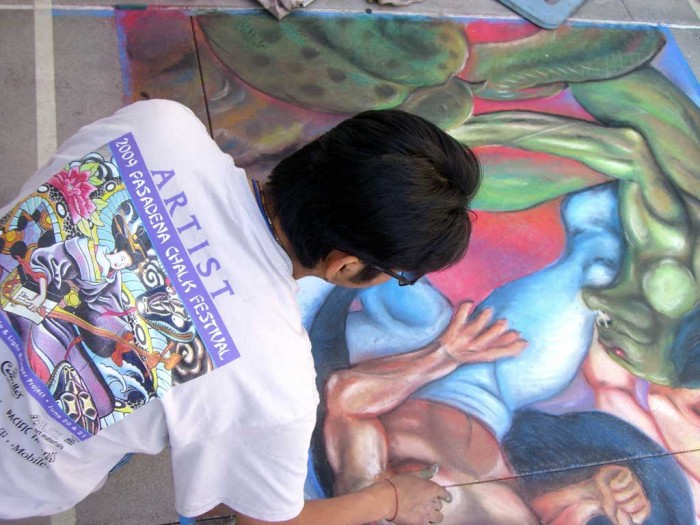 They gave us this t-shirt and some chalk material. Every year they provide goodies for the artists. 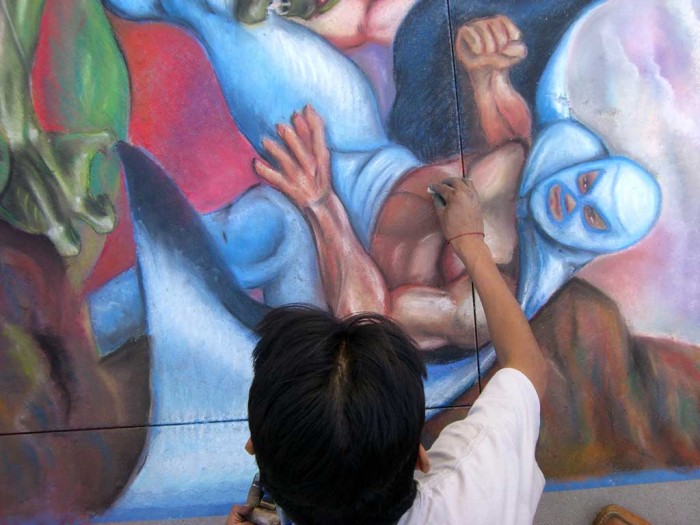 And here I am adding the final touches. From here we just remove the tape around the borders and sit and enjoy the rest of the day.

We often get compliments from visitors and always get questions about the mural. There are people who immediately recognize the character while others have no idea. Some funny comments from passers: “Rey Misterio!”, “Nacho” (from the movie nacho libre)., others thought it was “Blue Demon” another famous Mexican wrestler, which is understandable. The character was mostly blue, where El Santo is supposed to be silver. Surprisingly, the person who was most familiar with this character and Mexican wrestling altogether was an Asian guy. He knew about this character, his son El Hijo del Santo, and about Mexican wrestling federations. He commented about attending live events in California and following the careers of a number of Mexican wrestlers. It was really fun meeting someone  enjoyed this genre. 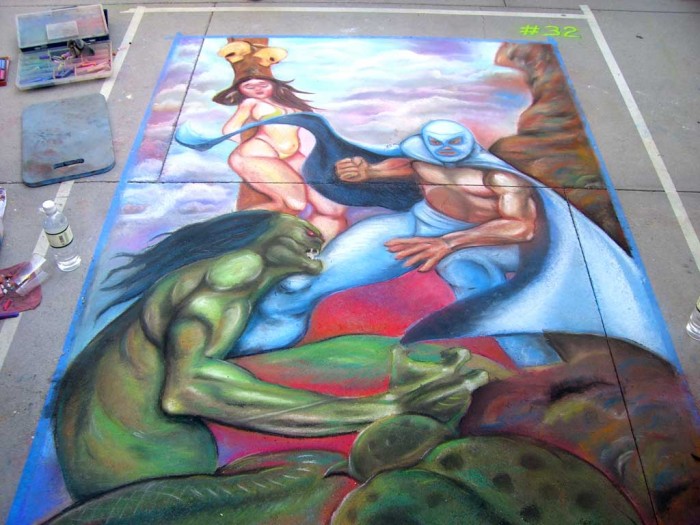 This is the final piece. Although I was happy with results. I think we could have worked a bit more on the details towards the bottom of the piece. I will try to push myself a bit more next time.

Unfortunately short after I took this picture my digital camera fell out of my hands and the screen broke (its fixed now), so I couldn’t take any additional pictures. However, my brother Sergio was there to save the day and took some great photos, Enjoy: 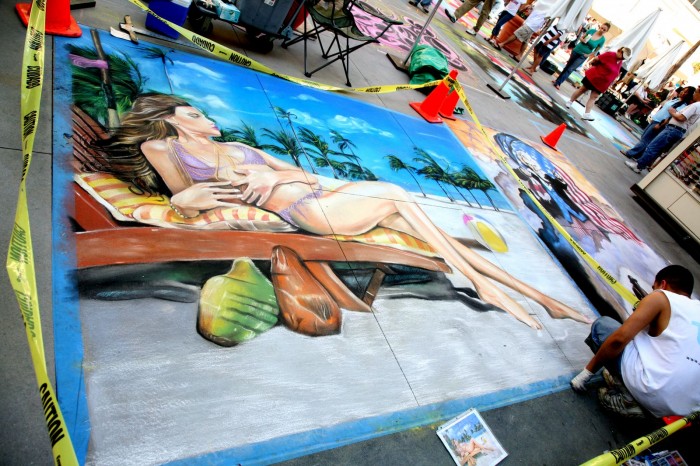 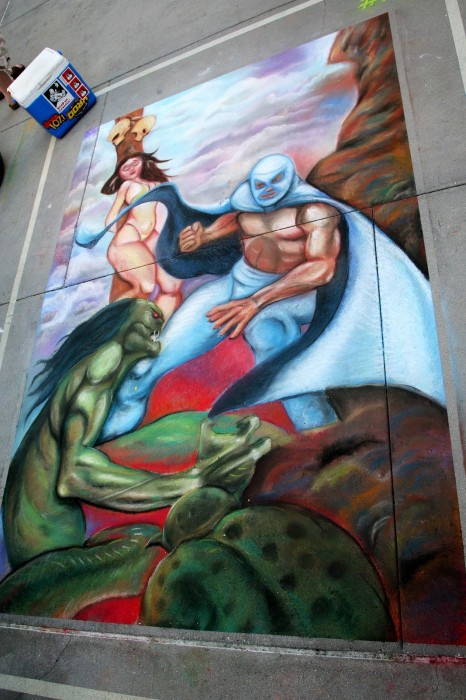 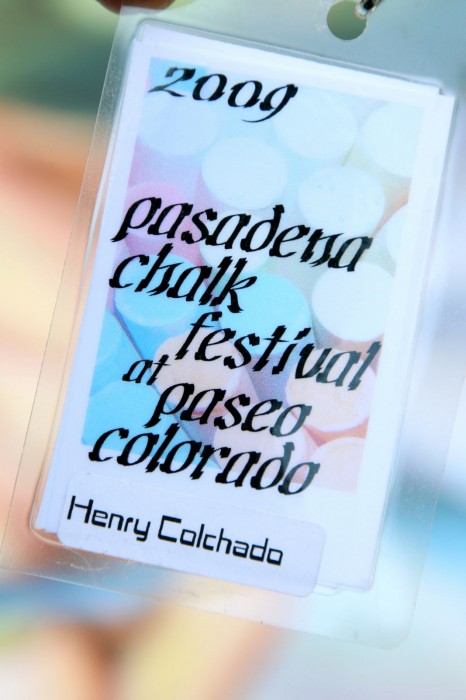 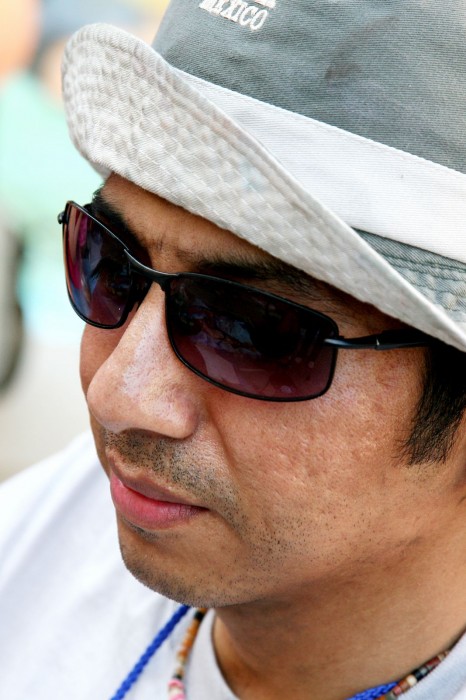 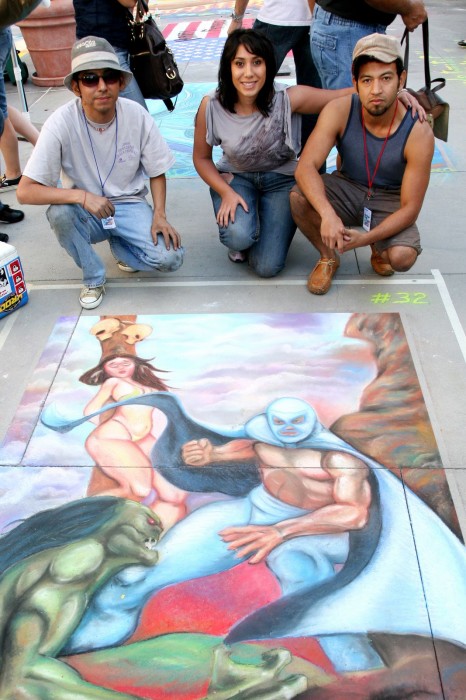 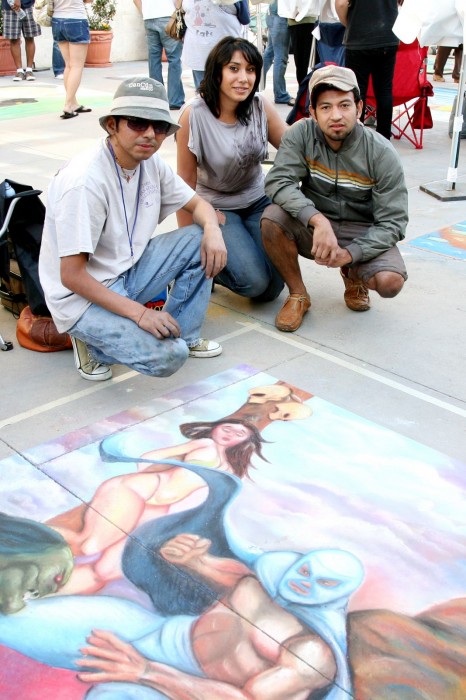 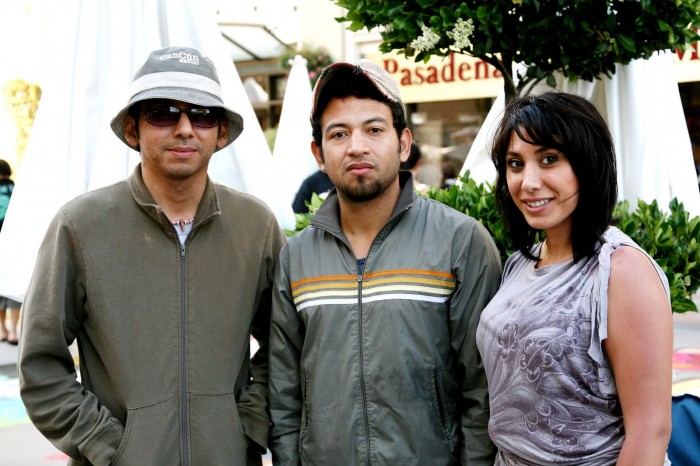 And that is all for the 2009 Pasadena Chalk Festival. Hope you enjoyed the photos as we sure enjoyed the event. Here is the team, me Henry, Ender and Nash. This is definitely turning into an eclectic team; I was born in Peru, Ender in Honduras, and Nash in Iran. I hope I have the energy to continue participating again  next year. Till next time.